Q&A with Mark Lewis, Founder of RAIN: A Tribute to the Beatles

Mark Lewis (Founder, Manager, Original Keyboardist) – As the managerial and creative mind that transformed Rain from a 1970s southern California bar band doing Beatles covers into an ultra-professional group, Mark Lewis recruited the excellent musicians who would gel into Rain's long-standing line-up. He traces his love of the Fab Four to the Sunday night of February 9, 1964 when his generation was smitten by The Beatles on “The Ed Sullivan Show.” Originally called Reign, the band gained national fame, changed its name to Rain and cut the soundtrack to the made-for-TV movie “Birth of the Beatles,” thanks to Dick Clark. An accomplished pianist at 13, having studied since age 5, he began his career playing the Farfisa organ in teenage rock bands around his native Los Angeles. It was Mark, the original keyboard player with Rain, who worked out all of the musical parts and sounds that enabled Rain to bring many songs that The Beatles themselves never performed live, to life. 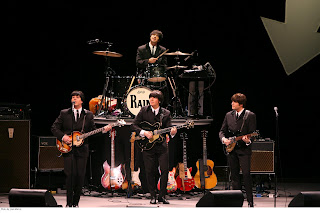 Describe your reaction when you first saw The Beatles perform?
The first time I saw the Beatles perform was on their first performance on “The Ed Sullivan Show." I was actually watching "Walt Disney" on the living room TV when my mom came in and said I should tune into Ed Sullivan. I was taking piano lessons at the time, and I figured my mom was trying to get me to watch Liberace or something as inspiration to get me to practice more. Even though I was only 12 years old at the time I was very much into music, and I used to collect records (45’s) and listen to music all the time. I remember watching the performance, and being totally blown away. I went out and bought the "Meet The Beatles" album the next day. It was rare that I came up with enough money to actually buy an entire album. I remember being amazed at everything about the Beatles. Their look, the way they talked, and especially their sound. Upon closer examination of the album, I realized that they wrote their own music, played their own instruments, and they all sang. The girls in the audience were going nuts for them. I remember thinking, "that seems like a good job."

RAIN has been performing together longer than The Beatles did. How did RAIN first come together and how has the show evolved over the years?
Rain, originally spelled “Reign,” was formed with the intention of becoming an original recording act. We played Beatles music for fun, and never thought of it as a tribute act. In fact, at the time, in the mid-1970s, there was no such thing as a tribute band. Like thousands of other bands, Reign wanted to write their own songs, and put out hit records, but in the meantime we needed to make a living, so we used to play in bars, and do Top 40 dance music. This was in the middle of the disco era, I might add.

I met two of the guys when they joined a Top 40 band that I was in that used to play around the L.A./Orange County area. We went on the road together, played each other some of our original music and became friends. When we got off the road we decided to form an original band, but in the meantime we decided that if we were going to play other people’s music it would be music that we really loved, eg. The Beatles, and we found that we had a special talent at really duplicating the sound. I was really amazed how well these guys could sound like the Beatles vocally. We were approached by a booking agent that was looking for an act that could sound like the Beatles to follow up a successful Elvis imitator that he managed. He met us. Next thing you know we were playing at various nightclubs on off nights (Monday, Tuesday or Wednesday) for no guarantee, but if anyone showed up we could keep whatever money came in the door. Well guess what, when it was promoted right, people showed up, and we made some money and played music we loved. I figured this was a cool way to make some money for a few months. Here I am 35 years later. The original guys in Reign, which became Rain, eventually quit the band in order to go off and to do their original music, and never were to be heard from again. I kept Rain going. Eventually met up with guys that are currently in Rain, and who happened to be really great musicians, and had a true love for The Beatles, and here we are touring the world, and starring on Broadway. Well that's the Cliffs Notes version anyway.

When did you first start playing music?
I started piano lessons at five years old. My mom played piano, my father sang, my older sister took piano lessons from my aunt, who was a piano teacher. So I started at a very early age.

If you could collaborate with any musician who would it be?
Unquestionably, Paul McCartney. If for no other reason, just to meet the guy. However, I don't think he'd need to collaborate with me.

What was the best concert you ever attended (besides The Beatles)?
Jimi Hendrix at the Hollywood Bowl. 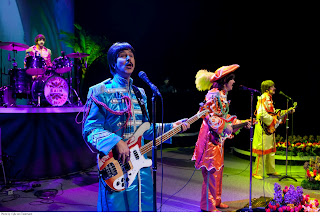 Other than Beatles tunes, what music is on your iPod?
I actually have very diversified taste. You'll find a little of everything on my iPod. Besides Beatles you'll find classical music including Beethoven, Gershwin, a lot of Elton John, Steely Dan, John Coltrane, Led Zeppelin, Billy Joel, Joni Mitchell, Greenday, Yes, and Genesis. The thing about being a Beatles fan is that The Beatles covered a lot of different styles of music in their short history. “She Loves You, “A Hard Day's Night,” “Sgt. Pepper,” “Helter Skelter,” “Yesterday,” “Strawberry Fields,” “In My Life,” “Let It Be,” “Something,” –  you can go on and on. To love The Beatles is to love many styles of music. Because they did it all.

RAIN: A Tribute to the Beatles will be playing May 18-19 at the Fox Cities Performing Arts Center for three performances only. For more information, visit foxcitiespac.com.

Credit: Interview provided by RAIN: A Tribute to the Beatles

Posted by Fox Cities P.A.C. at 9:51 AM
Email ThisBlogThis!Share to TwitterShare to FacebookShare to Pinterest
Labels: 11/12 Season, Broadway, RAIN: A Tribute to the Beatles