Wicked will be flying back to the Fox Cities Performing Arts Center Feb. 12 through March 2. If you plan to take a trip to Oz, make sure your ticket won’t leave you green with envy.

Due to the popularity of touring Broadway shows like Wicked, ticket buyers often find that tickets are available through third-party agencies or brokers, especially online. Patrons should take caution. The Center’s only authorized online ticket sellers are the Fox Cities P.A.C., in person or by calling (920) 730-3760, and  Ticketmaster, online at Ticketmaster.com/wicked and  by calling (866) 870-2717.

There have been instances where ticket brokers have launched websites that might include the theater name and/or name of our show in order to confuse ticket buyers. The only way that patrons can be sure that they are purchasing legitimate tickets at the original ticket price is through Ticketmaster or the Fox Cities Performing Arts Center’s ticket office.


Ticket buyers who purchase tickets from a ticket broker or any third party, should be aware that the Fox Cities Performing Arts Center is unable to:

Tickets for Wicked start at $49 and are on sale now.
Posted by Fox Cities P.A.C. at 12:14 PM No comments:
Email ThisBlogThis!Share to TwitterShare to FacebookShare to Pinterest

From Sketch to Stage: Wicked Costumes Come to Life


“Wicked was all about literally creating a world,” Hilferty has said. “As a costume designer, I’m creating everything. What is it like in this land of Oz? I created a culture so that I know how to develop what are ultimately the clothing ideas.”

She toyed with putting sleeves upside down, turning items sideways and twisting others. Hilferty refers to this process as “riffing,” which basically is like a jazz musician taking a note or an idea and playing with it to see what can be developed. This included adding clock pieces and gears to ensembles to create a retro feel.

To create the vision for Glinda, Hilferty used the sky, stars and clouds as inspiration. Audiences will see the details of Glinda’s ballgown, including sparkling sequins, as she glides across the stage.

Elphaba’s “rough and ready” exterior is harder by comparison. Hilferty envisioned her coming from the center of the Earth. Forty yards of fabric are used in the character’s costume, including 12 yards of layered fabrics in the corset alone. It takes one stitcher two weeks to make the creation.

More than 7,000 fabrics were used in Wicked to handcraft the distinctive looks. They were created, printed, manufactured, mixed, dyed and more for just the right touches. Ribbon was manipulated, beads were added, pleats fashioned and gathering sewn to create decorative details that come to life as actors and actresses move about the stage. Costumes are made to withstand eight performances a week.

Peer behind the curtain of Wicked’s wardrobe with more costume sketches below.

Posted by Fox Cities P.A.C. at 9:27 AM No comments:
Email ThisBlogThis!Share to TwitterShare to FacebookShare to Pinterest

10 Things You Didn't Know about Wicked 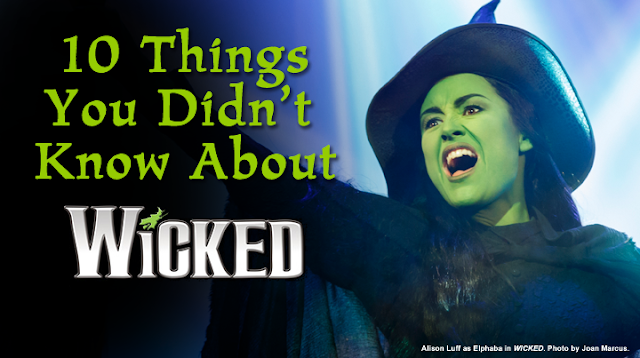 Broadway’s “Popular” show Wicked is celebrating its 10th anniversary and will return to the Fox Cities P.A.C. Feb. 12 through March 2. Think you know everything about the show? Guess again. Take a look at these behind-the-scenes fun facts to get a better idea of what it takes to tell the “untold story of the witches of Oz.”

• The electronics department uses enough power to supply approximately 12 houses. Including the sound and automation departments, the total would increase to 18 houses.

• 1,000 feet of steel cable was used to restring the flying monkey wings during the first year of the Broadway run.

• The carpentry department on Broadway has about 175,000 pounds of scenery and uses about 5 miles of cable to automate it.

• The dragon’s eyes are red LED bulbs that never burn out.

• The “life casts” for the animal masks take two to three hours, and the person loses most of their senses (smell, sight, hearing, touch) during that time.

• The show has 90 wigs and uses 70 during any given show. All are made of human hair, and made individually for each actor, using their own hairline in the front.

• During the first big “quick change,” 17 actors change from mob to students in 1.5 minutes (including costumes, wigs and shoes).

• There are 179 different types and finishes of leather used in shoes, gloves, hats and costume trim for Wicked.

Note: All of the above facts are about the Broadway version of the show unless otherwise, noted.

Tickets to Wicked are still available and start at $49. They can be purchased through Ticketmaster.com or by calling (866) 870-2717. Patrons also may purchase tickets in person at the ticket office, by calling (920) 730-3760 or visiting to foxcitiespac.com.
Posted by Fox Cities P.A.C. at 8:49 AM No comments:
Email ThisBlogThis!Share to TwitterShare to FacebookShare to Pinterest 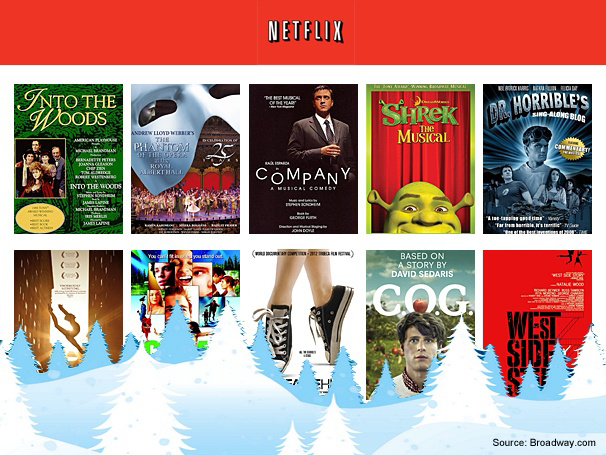 As the snow flies, there’s no better time to snuggle up with a movie. Here are Broadway.com’s 10 Broadway and theater movies to binge-watch on Netflix:

Fame High
When we were kids, we always dreamed of running away and joining a performing arts high school (OK, we still kinda do). Live vicariously through the real lives of toe-tapping teens from Fame High, aka the Los Angeles County High School for the Arts. A five-six-seven-eight!

Shrek the Musical
Celebrate the Broadway return of the great Sutton Foster (who will star in Violet beginning March 28) with the lighthearted live broadcast of Broadway’s Shrek. The 2010 Tony-winning tuner also stars Christopher Sieber, Daniel Breaker and Brian d’Arcy James as the grumpy green ogre.

Company: A Musical Comedy
Even if you’re spending the night alone with a bottle of wine (... fine, a box of wine), Raul Esparza is always here to keep you Company. Celebrate Bobby bubi’s 35th birthday all over again with the 2010 revival of the Stephen Sondheim masterpiece.

Into the Woods
Wait, did someone say Sondheim? Brush up on your fairy tales before the release of the new “Into the Woods” film with this 1991 classic (we still have a dusty VHS of this in the closet somewhere), starring Bernadette Peters, Joanna Gleason, Chip Zien and more stars of the original Broadway production.

First Position
Take a break from Broadway and check out “First Position,” an inspiring doc about teens competing at the prestigious Youth America Grand Prix, one of the most famous ballet competitions in the world. It’s really fun to eat a giant ice cream sundae while watching this, then not offer any of the ballerinas any.

West Side Story
There are a ton of classic movie musicals on Netflix, but “West Side Story” is the only one we can watch 200 billion times and never get sick of. Plus, we know all the lines. “How many bullets are left, Chino? Enough for you? Or you? ALL OF YOU!” You’ll totally freak out your dog.

The Phantom of the Opera at Royal Albert Hall
Sierra Boggess and Ramin Karimloo (soon to make his Broadway debut in Les Miserables) will heat up your freezing living room in no time in the passionate and sensual 25th anniversary production of Phantom at Royal Albert Hall. We dare you to watch the final lair scene without bawling.