T-10 Days Until the Tony Awards

The countdown is on! Only ten days left until the 2013 Tony Awards®. Here is our top ten list of all things Tony! 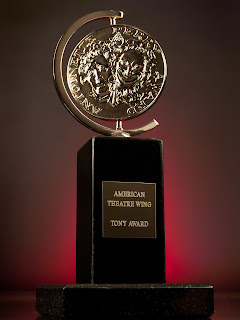 2. Watch nominee reactions, including ones from Tom Hanks and Cyndi Lauper.

4. Download your online Tony ballot from The New York Times.

5. Enter The New York Times Daily Theater Trivia Contest and the Broadway Across America Tony Award Sweepstakes for a chance to attend the 2014 Tony Awards!

7. Who is "Tony"? Read about the woman who inspired it all.

8. In need of a quick getaway to New York? Tickets are on sale now to this year's Tony Awards.

From Fancy Shoes to Toe-Tappin’ Tunes: A 2013 Broadway Spring Preview

When you work for the Fox Cities Performing Arts Center, you often get questions about what is the next hot show on Broadway. Each year I get the privilege to travel to New York to preview the newest Broadway shows which are likely to tour the country in the future. (Like they say, it’s a tough job, but someone has to do it.) Now I’m back to share with you the scoop on what is new and hot on Broadway.

Pippin: This was the first show I saw when I arrived and it was one of my favorites this year. Although it is a total theater classic, I have to admit I wasn’t familiar with the show. From the music (score by Stephen Schwartz from Godspell, Wicked) to the sizzling choreography in the style of Bob Fosse to the incredible acrobatics, there is no question why this show is Tony®-nominated for Best Musical Revival. You have to see it to believe it!

Cinderella the Musical: The show stars Minnesota native Laura Osnes, who was discovered on the 2006 reality show “Grease: You’re The One That I Want.” Since her debut as Sandy, Osnes has gone on to play some of Broadway’s leading ladies including Bonnie Parker in Bonnie & Clyde, Hope Harcourt in Anything Goes and Nellie Forbush in South Pacific.

Osnes is joined on stage by the charming Santiono Fontana who is also nominated for a Tony as the young prince Topher. The entire production is stunning and with the classic score by Rodgers and Hammerstein, it’s a perfect fit anyone who loves this enchanting story.

Kinky Boots: Speaking of shoes of a different kind, the new Broadway musical Kinky Boots offers a fun night out and a heartwarming story about always being true to who you are. Leading the pack with 13 Tony nominations, this show is not just a pretty pair of heels, but a very formidable contender in the Best New Musical category. The cast recording is due to be released this spring and composer Cyndi Lauper may become the first women in Broadway history to win the Tony for Best Original Score. Forget money, this Tony nomination changes everything.

Motown The Musical: Another soon to be released cast recording to watch for is Motown The Musical. From “ABC” to “What’s Going On” this show follows the 25 year journey of founder Berry Gordy and the rise of the Motown record label that launched the careers of Diana Ross, Michael Jackson, Stevie Wonder, Smokey Robinson and Marvin Gaye. Here’s a fun fact for you, the Tony-nominated Valisia LeKae (Diana Ross) once performed on the the Fox Cities Performing Arts Center stages with the musical All Shook Up. When I met her after the show, the first words out of her mouth were “I love Appleton!” I kid you not, meet her again here:

Matilda The Musical: Last but certainly not least, is a big Broadway hit featuring many pint-sized stars. Nominated for 12 Tony awards including Best New Musical, Matilda The Musical is perfect for families featuring colorful costumes, onstage magic and over-the-top comic performances (especially the hilariously wicked head mistress Miss Trunchbull). The show is based on the Roald Dahl classic children’s book and is also recognizable from the 1996 movie featuring Danny DeVito.

What 2013 spring musicals do you want to see come to the Fox Cities?

Tara Brzozowski is entering her ninth year with the Fox Cities Performing Arts Center. As Director of Marketing and Public Relations, she enjoys the opportunity to work every day with a dynamic team to tirelessly promote the wide variety of Center events and activities. While she loves a good show, she much prefers to work behind the scenes rather than on the stage.


Posted by Fox Cities P.A.C. at 4:59 PM No comments:
Email ThisBlogThis!Share to TwitterShare to FacebookShare to Pinterest
Labels: Broadway

What is the Boldt Arts Alive Series?

Here at the Center we hear a lot of excitement from our patrons about the Broadway Season announcement each spring, but did you know we also have another series offering cultural performances, dramatic plays and solo musical artists?

There are not too many places where you can go to see a Grammy® Award winning Mariachi band, a step company that has performed to a sold-out crowd at the Kennedy Center, and a member of the band Genesis all in a matter of months right in your own backyard. You can experience all of these cultural performances and more when you attend a Boldt Arts Alive! Series performance at the Fox Cities P.A.C. Not only is the Arts Alive! Series filled with cultural performances from around the globe (including performers from right here in the Fox Cities), it is also a chance to broaden your horizons in a way that you may never have deemed possible without checking a bag to get on a plane to Africa, Mexico or Japan!

As the old saying goes, “you don’t know what you don’t know” so here’s your chance to take a risk and explore various artists and genres from throughout the United States and still be home in time to watch your favorite late night television show!

And who knows, you just may decide to pursue that old dream you had of learning Taiko drumming.
Posted by Fox Cities P.A.C. at 2:00 PM No comments:
Email ThisBlogThis!Share to TwitterShare to FacebookShare to Pinterest

What is War Horse? 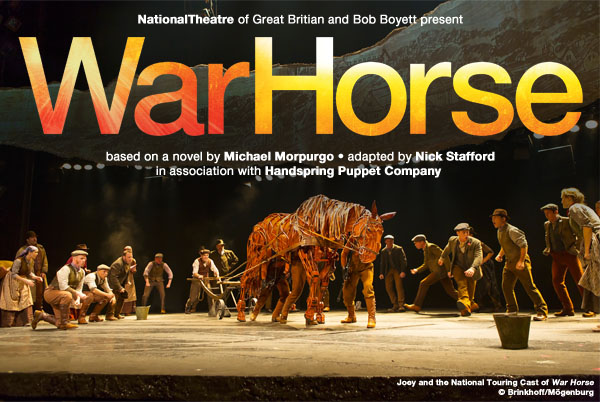 War Horse is making its Wisconsin Premier at the Fox Cities P.A.C. June 25-30. Learn more about the show The New York Times raves as, "theatrical magic."


THE STORY
As World War I begins, Joey, young Albert’s beloved horse, is sold to the cavalry and shipped from England to France. He’s soon caught up in enemy fire, and fate takes him on an extraordinary journey, serving on both sides before finding himself alone in no man’s land. But Albert cannot forget Joey and, still not old enough to enlist, he embarks on a treacherous mission to find him and bring him home.

THE PUPPETRY
Life-sized puppets created by South Africa’s Handspring Puppet Company, bring to life breathing, galloping, charging horses that are strong enough for men to ride. The horses’ flanks, hides and muscles are built of steel, leather and aircraft cables.

THE MUSIC
It’s a play with music! War Horse includes a young girl who sings and plays the fiddle, accompanied by a male vocalist who also plays the accordion.

THE AWARDS
Winner of five 2011 Tony®-Awards including Best Play.

THE MOVIE
War Horse was the inspiration for 2011 Steven Spielberg’s feature film of the same name, which earned six Oscar nominations including Best Picture.

Tickets for War Horse are onsale now and available at the Fox Cities P.A.C. ticket office or online. Kids' Day on Broadway is Saturday, June 29 at 2 p.m. Buy one adult ticket, receive a kid's (age 18 and under) ticket free. Restrictions apply. Click here to learn more.
Posted by Fox Cities P.A.C. at 3:45 PM No comments:
Email ThisBlogThis!Share to TwitterShare to FacebookShare to Pinterest

2. Flexibility to Fit Your Life
Season Ticket Holders can easily exchange tickets for another day or time.

4. Great Package Savings
You save up to 25% over buying them the day of the show by purchasing now. Plus save on additional tickets throughout the season!

For more information of becoming a Season Ticket Holder, visit foxcitiespac.com or call the ticket office at (920) 730-3760.
Posted by Fox Cities P.A.C. at 2:05 PM No comments:
Email ThisBlogThis!Share to TwitterShare to FacebookShare to Pinterest
Labels: 2013-14 Season, Broadway, Season Tickets

A King-Sized Thank You!

After 32 unforgettable performances and one magical fundraising event with ROAR: A 10th Anniversary Safari Event, the last trucks are packing up Disney's The Lion King and hitting the road today. Thank you to all who came out to experience this Broadway blockbuster. Click through our photo albums on Facebook to see any moments you missed and share your favorite memories with us online on Facebook, Twitter and Blogspot!

Here are a few of our favorite moments!

What were your favorite moments?

Posted by Fox Cities P.A.C. at 3:34 PM No comments:
Email ThisBlogThis!Share to TwitterShare to FacebookShare to Pinterest

Fun Facts about Joey, the star of War Horse
﻿﻿﻿﻿
1. The puppet, Joey, which weighs 120lbs, is handmade by 14 people. Its frame is mostly cane, soaked, bent and stained.

2. An aluminum frame along the spine, lined partly with leather for comfort, allows the horse to be ridden.

3. Stretched, hosiery-like Georgette fabric makes up the “skin” beneath the frame.

4. A puppeteer at the head controls the ears and head; one in the heart controls breathing and front legs; a third in the hind controls the tail and back legs.

5. A harness connects the puppet’s and puppeteer’s spines so his or her movements become the breathing of the horse.

6. The tail and ears are moveable instead of the lips or eyelids, because that’s how horses usually express themselves.

8. The puppet, just under 10ft long and about 8ft tall, has about 20 major joints. Vertical levers curl the knees and lift the hooves.

9. The neck is made of carbon fiber glass for flexibility.

10. The eyes are black color behind clear resin so light refracts through them.

11. The right hind lever moves the tail up and down; the left hind lever, left to right; moved together, it spirals.