Tuesday was a big day for War Horse's star! Joey (War Horse's life-size equine puppet) met a real horse named Jeffrey from CHAPS Academy, met some new friends around the Center and even took a little stroll on College Ave.

See Joey in War Horse tonight through Sunday!
Posted by Fox Cities P.A.C. at 11:00 AM No comments:
Email ThisBlogThis!Share to TwitterShare to FacebookShare to Pinterest
Labels: 2012/13 Season, War Horse

What Are Annual Partners?

You may have noticed the term Annual Partner when reading Fox Cities Performing Arts Center materials or social media posts and wondered what it means, well ponder no more! Like actors in performing shows, Annual Partners play an important role to the Center.

As a nonprofit charitable and educational organization, the Center relies on the financial support of Annual Partners in order to present many of the diverse programs that enhance the arts experience in our community. 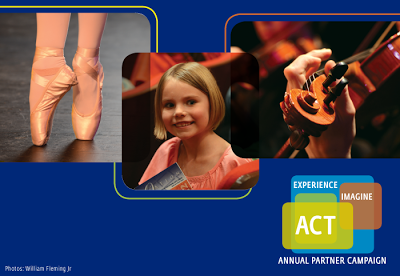 In addition to investing in the Fox Cities P.A.C. through yearly contributions, Annual Partners receive great benefits like backstage tours and access to the Partners Lounge, which includes complimentary beverages, desserts and a private coat check, for every ticketed performance.

Imagine the impact of the arts, enriching the quality of life throughout Northeast Wisconsin! By presenting Annual Partner-supported diverse arts and educational programs, people from all walks of life are encouraged to come together, enjoy and participate in the arts. As the Center reflects on its 10th Anniversary celebration, we recognize the success of our programs are in part due to the continuing support of Annual Partners.

To learn more about Annual Partners and the many benefits that they receive, with giving levels starting at $50, visit foxcitiespac.com or contact the Annual Partner team at (920) 730-3782.
Posted by Fox Cities P.A.C. at 1:50 PM No comments:
Email ThisBlogThis!Share to TwitterShare to FacebookShare to Pinterest

Thank you to all who entered and voted!

As we wrap up our Tenth Anniversary Season, we’re taking a look back at how we have commemorated the anniversary with you — our patrons and community supporters — throughout the year. From the Community Open House (remember the awe-inspiring Mamma Mia! Community Flash Mob?), to publishing our commemorative report and collecting your favorites memories with Share Your Story; to capturing congratulations from performers on video, we’ve been celebrating throughout the season!

During the next two weeks, we’ll be going into detail on these various events here on our blog and other social media channels. Please enjoy the memories and here’s to making more!

Not connected with us on social media? You can like us on Facebook or follow us on Twitter to join us on this trip down memory lane and stay connected for the latest news, event updates and special offers!
Posted by Fox Cities P.A.C. at 10:12 AM No comments:
Email ThisBlogThis!Share to TwitterShare to FacebookShare to Pinterest

The Head, Hind and Heart of Joey the Horse

It beooves Head, Hind and Heart to act as one
Puppeteers learn to move, sound, even breathe like a horse

Let’s get the basics out of the way first: No, it’s not hot or claustrophobic in there. Yes, they can see most of what is going on. Sure, they stumble once in a while. And that joke you’re dying to make about the back end? He has already heard it.
Life as the horse can be exhausting and unpredictable, but Joey’s Head, Hind and Heart have become downright comfortable in his transparent skin.

“I actually love the anonymity of it,” said Rob Laqui, a dancer from Minnesota who brings up the rear in one of three trios who will play[ed] Joey at the Kennedy Center. “I like being able to be this character and have this arc throughout the entire show, and yet not be seen. I have no qualms at all about being in the puppet. Even from the audition process, I was like, ‘Oh, well this makes sense. I like it in here.’ I was made to be a horse’s hind!”

To successfully bring Joey to life, the three person puppeteer team has to be the star of the show while being as inconspicuous as possible. Being “in horse,” as they call it, is so demanding that horse teams alternate shows and play small roles such as birds or soldiers on their off days.

“I think the anonymity of the performer helps the puppet horses to live, because the actor is not screaming for attention,” said Adrian Kohler, founder of Handspring Puppet Company. When he and co-founder Basil Jones cast and train the show’s puppeteers, they look specifically for men and women willing to handle the physical demands while sacrificing their egos. So ingrained is the all-for-Joey concept that if you want to interview one member of a horse team, you’d better bring three chairs. At the show’s insistence, the
Head, Heart and Hind are a package deal.

“It doesn’t come alive unless all three of us are there,” said the Head to Laqui’s Hind, a.k.a. Christopher Mai of San Francisco, who is also the chief puppeteer in the traveling company. “We have great team chemistry,” said the Heart, Derek Stratton of Norwich, N.Y. “Each night there’s a journey we’re going to go on, both as individuals and as one character.”

It takes at least two weeks of intensive training before the technical aspects of operating the puppet become second nature. Each role requires such different skills that there is no crossover: Once a Heart, always a Heart. During six weeks or more of rehearsal, performers’ instincts take over, and they are ready to convince an audience that they are a horse.
“We have to believe with our full bodies, with our full souls, with our full heart that we are this character,” said Laqui. “It’s exhausting. . . . After every show, I have to take a 15-minute decompression moment to be like, ‘I am not a horse. I can speak English now.’”

Oh, yes — the language. Joey the horse narrates the novel by Michael Morpurgo from which this play is adapted. But in the play, Joey speaks only horse.

It takes three to whinny, for instance, because horses can hold far more air in their lungs than humans. So the Head might start the whinny, the Heart might enter and pick up the middle and the Hind might jump in and finish it. This is an effective yet imperfect system.

“There are definitely times where I’ll make a noise and I’ll be like, ‘That was like a chicken meets a turkey — I don’t know what I just made,’” said Laqui. “But what’s sort of cool is this openness and freedom that we’re granted, we’re allowed to fail and it’s okay.” Actors relish that license to be spontaneous, not only in sound but in movement. They are instructed not to behave, because animals often don’t.

They need to hit certain choreographed cues for safety, but there is room for improvisation. For instance, if Joey nuzzles a soldier near him on Friday, he might nip him Saturday and shy away from him Sunday.

“We respond differently because the actors deliver their lines differently,” said Laqui. “They have different intents or intensity behind a line and we have to respond in kind.”

The three agreed that the toughest scenes are the ones in which Joey stands still. It is then that they are unscripted and must use their own imaginations to keep the horse alive, flicking its tail, watching a bird — just being a horse. Most of all, Joey must keep breathing, his chest rising rhythmically up and down on the power of Stratton’s quadriceps. Otherwise, they say, the spell is broken, and Joey is
reduced to three guys and a puppet.