“Test-Drive” Broadway Season Tickets and Save Up to $60!

If you’ve been considering a 2012/13 Kimberly-Clark Broadway Across America – Fox Cities Season Ticket Package for the Center’s 10th Anniversary Season, now is the time!

Visit the Fox Cities P.A.C. on Tuesday, June 26 from 4–7 p.m. for a special Summer Seat Sale. For three hours only, you can "test-drive" different seating locations, speak to ticket agents about various package options and save up to $60* on select ticket packages. Plus you’ll receive a free gift with purchase, while supplies last. Secure great seats for Blue Man Group, Elf, Catch Me If You Can, The Addams Family and War Horse months before tickets go on sale to the public. And don’t forget, you will also have the option to add tickets to Disney’s The Lion King in one easy purchase.

Stop in from 5-6 p.m. for a Seat Sale Social Hour and enjoy refreshments as you search for the perfect seats for your 2012/13 Broadway Season Ticket Package!

*Valid in person only on select non-premium seating areas. Not valid on previously purchased packages. Free gift with purchase good while supplies last.

Anyone who has seen the hit Broadway musical MAMMA MIA! knows that it’s hard to choose just one favorite moment from the show because they are all so great! Tickets for MAMMA MIA! went on sale this morning at the Fox Cities P.A.C., so to celebrate its return August 21-26, we wanted to share five of our favorite MAMMA MIA! moments.

Tickets are on sale now for MAMMA MIA! at the Fox Cities Performing Arts Center!
Purchase your seats in person, by phone at (920) 730-3760
or online at foxcitiespac.com!
Posted by Fox Cities P.A.C. at 2:22 PM No comments:
Email ThisBlogThis!Share to TwitterShare to FacebookShare to Pinterest
Labels: 2012/13 Season, Broadway, Fox Cities P.A.C., Mamma Mia

Billy Elliot the Musical opened last night at the Fox Cities P.A.C. The story begins in a small town, in Northern England in 1984. It is raw in language, devoid of color, and fierce with loyalty to the unions that kept the characters alive.

As described by Director Stephen Daldry, “What appealed to me most about doing the show was to have the opportunity to delve into the miners’ strike. That strike was one of the most important events in my life, as well as in domestic village politics. It’s not possible to exaggerate the cultural flowering that happened during that year in the pit villages. There was a real shift in consciousness for everybody involved in those villages, which is part of the sadness of the whole story. Because something extraordinary happened – and then it was wiped out as they shut down the pits. So we wanted to talk about the community and the family as much as Billy in the musical. The strike bookends the show. The theater lends itself to big, working-class anthems of struggle and loss. You can present that in a much more believable and moving way onstage than on film.”

“The Stars Look Down” spoke of the emotion of a community facing the loss of everything that defined them. We are brought to the poignant “We’d Go Dancing,” where memories are better than reality in the time of change. As the town demands loyalty to the union, the anger that energizes the strike in “Solidarity” is fierce and in your face. In a community that embraces the harsh, overbearing male role model, with furtive excitement, two boys explore cross dressing in “Expressing Yourself.” Our young star, Billy, shows his sensitivity and heartache of losing his “mum” in “Dear Billy”and his rebellion against his father’s demand that he give up dancing in “Angry Dance."

The first act made me squirm, yet I was amazed at the talent of Billy played by Ty Forhan. That young man was on the stage most of the time. His every move was portraying the character and emotion of the scene in which he played. His dancing was amazing for one so young. It was fun to see the way Billy’s character was formed through the choreography. From the stressed beginner in over his head at his first dance class, to the passionate dancer at the end, the development of his character shined through.

Act II begins with “Merry Christmas, Maggie Thatcher,” a rebellion against authority, sung with much profanity and many finger gestures against her rule. Rich Hebert was solid in creating the scene “Deep Into the Ground” and “He Could Go and He Could Shine” as he portrayed a man who learns a heart of understanding towards his son. The choreography was interestingly masculine for the “non dancer” characters. I had never thought of drunken stumbling as a form for choreography. The story of the journey from the beginnings of the British National Union of Mineworkers strike, to the anguish and remorse of becoming a “scab” in order to provide for his boy, was very well told.

While it was painful to watch the anger and ridicule of his family not accepting Billy’s desire to dance, I was relieved to see the resolution in the second act of Dad deciding to support Billy in his passion. The music defined the emotion of the story. The choreography demonstrated the characters and the story line. Overall, it was an interesting view of community and a family struggling with change.
Posted by Fox Cities P.A.C. at 1:51 PM 5 comments:
Email ThisBlogThis!Share to TwitterShare to FacebookShare to Pinterest
Labels: 11/12 Season, Billy Elliot the Musical, Review, Show and Tell

Billy Elliot is All Kinds of Dance

Billy Elliot the Musical is a glorious celebration of dance – all kinds of dance. 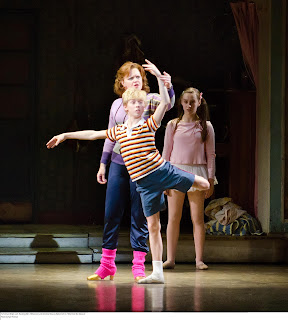 Yes, it’s the story of a young boy who aspires to a career in ballet, which is why people are often surprised to discover the broad movement palette utilized by choreographer Peter Darling. The choreography encompasses tap, hip hop, jazz, acrobatics, and folk dancing; even a pedestrian activity such as walking – no pun intended – is used as a form of expression.

Tap fuels the show at least as much as, if not more than, ballet. “Tap is rhythmically exciting and such an expressive kind of dance,” says Darling. “At the same time, it’s synonymous with show business and musicals. And Billy Elliot is very much a musical; it’s not a ballet.”

In most musicals, tap is a rapturous articulation of joy. Often, its raison d’etre is nothing more – or less – than to entertain the audience. That kind of tap exists in Billy Elliot, most notably in the exuberant finale. But Darling also uses tap in a dark and powerful way in the “Angry Dance,” Billy’s response when his father orders him to give up ballet.
“Tap actually lends itself extremely well to anger,” says Darling. “The ‘Angry Dance,’ in a way, is about Billy wanting to stop dancing. But the rhythm in his head keeps on going. If you want to stop your feet from moving, you slam them to the floor. So that’s where the idea came from: Billy would slam his feet to the floor, and there would be a rhythmic element to it. And it went from there.” 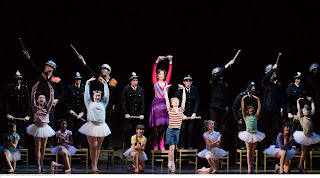 The dances in Billy Elliot either advance the narrative or reveal something about the characters. “Born to Boogie” takes place after Mrs. Wilkinson, Billy’s teacher, reads a letter from the boy’s dead mother. Rather than launch into a ballet, Darling upends expectations with a jazzy number. “When you study ballet, it’s non-stop classes,” he says. “It almost feels like wearing a straitjacket. When Billy gets upset by the letter, Mrs. Wilkinson decides to give him a present, to cheer him up. Instead of saying, ‘We’re going to do 24,000 tendus again,’ she says, ‘OK, let’s have some fun. Let me find out how you move.’ So Billy starts to do Michael Jackson moonwalking, and she starts to do a few old steps. It’s a conversation, a fun dance, which is what jazz is.”
Darling infused the ballet choreography with contemporary movement, steps that would be anathema to traditional classical dance. When Billy auditions for The Royal Ballet in the number “Electricity,” the ballet he performs includes street dance, hip hop and acrobatics. “The idea is that The Royal Ballet is looking for young dancers with potential, who are phenomenal movers,” says Darling. “And Billy shows that he’s a phenomenal mover who can also turn three pirouettes.” That number, more than any other in the show, underscores the beauty and vitality of ballet. “Ballet can be one of the most thrilling things you’ll ever see, because of the amount of training, technique, and strength required to do it. The training enables the body to do things that are phenomenally difficult. You’re able to travel through the air. It’s got a great freedom to it.”

Content Disclaimer: Billy Elliot the Musical contains profane language and some scenes of confrontation between police officers and minors.

Broadway Buzz: What’s Not to Love About the Tony Awards?

The 2012 Tony Awards® aired nationwide last night on CBS, bringing Broadway to your living room for one night only.

To start the evening, the show opened with a special “Hello” from the cast of The Book of Mormon, which won Best Musical in 2011. Neil Patrick Harris returned as host for the third time, introducing featured performances, special star appearances and, of course, the awards for Broadway’s biggest accomplishments this season. Once walked away with eight awards including Best Musical, and Peter and the Starcatcher, a prequel to the Peter Pan story took home five awards. With all that and more, what’s not to love?

In case you missed the 2012 Tony Awards, you can...
Did you tune in to the Tonys? Tell us your favorite moments and which shows you hope will head out on tour next season.
Posted by Fox Cities P.A.C. at 4:18 PM No comments:
Email ThisBlogThis!Share to TwitterShare to FacebookShare to Pinterest
Labels: 11/12 Season, Broadway, Broadway Buzz, New York, Tony Awards

For referring a friend, another lucky winner was selected to win two tickets to Five by Design’s Club Swing.

Winners, be sure to check your email for details on how to claim your prize!